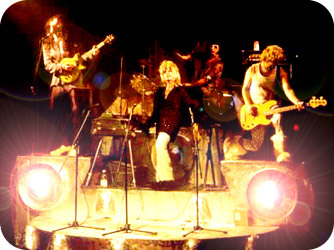 Jerungdu started as a band and gradually turned into a theater company. The left side bar links lead to the content from the web pages formerly found on www.jerungdu.com.

In 1995, I recruited several other musicians to make a demo recording of all the songs my former band members refused to play. I called the band "Jerungdu".

The word "Jerungdu" comes from the Sambia tribe of Aborigines in New Guinea. It means "the essence of maleness". Jerungdu is an Aboriginal rite of passage ritual used to initiate prepubescent males into manhood (sort of like western rock and roll concerts).

The first demo received great press and until 2003, Jerungdu was dedicated to pursuing material that most of my former band mates would still have refused to play.

How fitting it was that a ‘band’ drawing an analogy between pubescent homoerotic rites of passage and rock and roll music would pursue a direction in, of all things, ‘THEATER!’

It started innocently enough. I was nervous about the first show that I booked at the Loring Bar. Even though I got great musicians to play it, I felt there was a strong chance that the band might not be very good. I decided that if we were going to be bad, we might as well at least be entertaining. I recruited actors and drag queens to perform mini theatrical sketches throughout the performance. It turned out that my initial worries about the band were unfounded. They did come around and sounded pretty good. But the conceptual direction of "theater rock" was set in motion.

I had very little background in theater. But that didn't stop me. I set out to make theatrical art "intuitively", sort of how the punk rock bands I grew up listening to approached music. I felt rock and roll made by conservatory trained musicians was pretentious and boring so the same could be said about theater made by academically trained thespians. Therefore, Jerungdu employed a rather unconventional method.

We, for example, approached theater rehearsals in the same manner as most rock musicians approached band practice. It was a bit of a "party" atmosphere. There was usually lots of beer drinking at rehearsal. Also in the spirit of rock and roll, the songs were NEVER notated in the form of sheet music. This was looked down upon by some of the "trained" actors cast in the shows who were used to a more "structured" approach. It was an ongoing struggle to get actors to try alternative methods of creating theater. 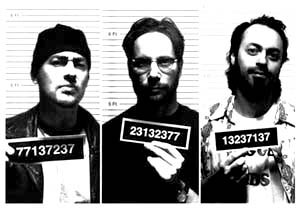 Jerungdu explored socially and culturally relevant topics through live music and multimedia theater. We hoped to capture the visceral intensity and emotion of a rock show but with the added element of a narrative storytelling. We pursued edgy, often sexually charged, over the top original scripts with loud in your face original music that would often meld or defy convention.

I found out the hard way that the theater community is totally unlike the rock scene. For some reason, critics and actors actually hold "established" scripts in higher regard than original work. If the rock scene operated that way, the only bands getting any attention would be the ones playing ACDC and Led Zeppelin covers in bowling alleys. Though we refused to ever pursue established scripts, we were somewhat fortunate for receiving a modest degree of attention for our original work.

Jerungdu has earned a reputation for tackling sensitive subject matter with an edgy and irreverent sense of humor and without pulling punches. Our multidisciplinary theatrical rock shows were loud, musically challenging, conceptually layered, visually stimulating and filled with dirty jokes. (See the reviews page.) We have written and performed the following musical narratives: Dragon Fist, Hidden Gerbil: A Kung Fu Musical, Mahoney's Mirror: A Sci-Fi Musical Comedy Adventure, Barneezlebub: A Hillbilly Porn Opera, Surfcracker: A Surf Adaptation of the Nutcracker, and Sedated: A Tribute to the Ramones. Jerungdu also performed the music in Marvel Ann Theatre's Funny Sound of Music Girl at the 2001 Fringe Festival. Our work has been awarded grants from the Metropolitan Regional Arts Council, COMPAS, the Minneapolis Office of Cultural Affairs and the Minneapolis Arts Commission.

Dozens of musicians, actors, videographers, writers, choreographers, puppeteers, performers, animators, designers and technical staff have worked with the Jerungdu project both live and in the studio.