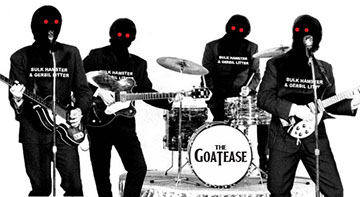 My first exposure to the GoaTease took place some time in the mid 80s. I was in the men's room at First Avenue when sitting to the side of me above the toilet paper rack, I noticed a cassette case. The cover read The GoaTease Chain Tape released on the "Flaming Flatulence" label.

The tape graphics said that if I made seven copies of The GoaTease Chain Tape within seven days and shared them with others I would receive good luck. I did just that figuring that I could use all the good luck I could get. After randomly finding the Chain Tape, I would periodically cross paths with the GoaTease from time to time, while never actually meeting them.

In 1991, my sister Mo had an art opening at the Minneapolis hipster coffee shop Muddy Waters. I came down to check out her photos and catch a solo acoustic set by my college buddy Mark Kaufman.

As I sat at the bar, I noticed four figures walking up 24th Street, each dressed head to toe in black wearing black bags over their heads. As they approached I also noticed the verbiage printed on the front of their matching black shirts reading "Bulk Hamster and Gerbil Litter". They entered and began picking up their instruments. "How bizarre" I thought while laughing out loud. As it turned out, the band's "look" seemed much less bizarre when compared to their musical performance.

What I remember about the first song was the numerous times the musicians switched instruments. It's not so unusual to see instrument switching on stage, but when it happens half a dozen times in one song, that's a first. At one point, one of the musicians was actually sawing on a 2 x 4 in rhythm with the song.

Then when I couldn't imagine it getting any weirder, the second song they played was a relatively faithful cover of "Tush" by ZZ Top... faithful except that they played it with a cheesy drum machine. Actually, ZZ Top used cheesy drum machines on the Eliminator album. Never mind then. After they finished the cover song, the band set down their instruments and walked back up 24th Street.

I asked my sister where she found the band. She said she didn't find them. Muddy Waters gave her the number of a guy with a PA system and when she called, the guy offered free PA rental if his band could play. She agreed.

Then after a one hour acoustic set by Mark Kaufman, the GoaTease came back and played the exact same two song set from earlier and left just as they had done the first time. The night ended with an unplanned acoustic performance by Grant Hart who just happened to show up. After witnessing this unlikely night of entertainment, I was eager to experience my next GoaTease encounter.

A few months later the GoaTease were the musical guests at a poetry slam. The event was organized by Newt Skink who had contacted them to provide music. This was the infamous GoaTease performance where they took minimalism to a higher level by not actually appearing at their own concert.

I arrived to see flyers placed on the tables with a statement about the growing trend of lip syncing among current pop entertainers of the time. It explained how that night's concert by the GoaTease represented the "next step in the evolution of live musical performance". The concert featured only prerecorded material and no live content. It was to be the first live performance with no live performers. They considered taking the concept to the "next level" by neglecting to submit a tape of the performance all together. However, since they considered themselves "pop" musicians, it was not their policy to present material that was "too far ahead of its time". Mark Kaufman produced a video documenting the event.

I had only seen one other flyer for a GoaTease show since. That show was at the 400 Bar but I didn't attend since it had snowed about three feet that night. That was the last I had heard of them until the year 2001. 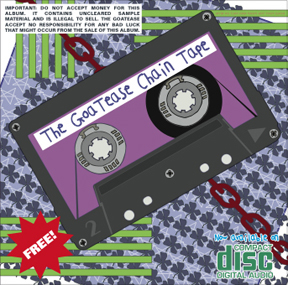 I decided to improve my luck by making the GoaTease Chain Tape available on my website. I put a few sample tracks from the cassette on my site with a message to my visitors: To receive good luck, send a blank 90 minute cassette and a self addressed stamped envelope and I will dub a copy. I have never yet received a single request for a free copy of The GoaTease Chain Tape. However, a few months after posting this offer, I received a package with no return address from the GoaTease themselves.

The post mark on the package was from Idaho which I found strange. I thought they were from Minneapolis. Maybe they moved. Maybe they were only visiting here for a short time. Since I used to publish my mailing address on the site, I assume that is how they found me. The package contained a new version of the Chain Tape on CD. This one was different from the first cassette I found in the 80s. There were some different songs I didn't hear on the tape version. They also sent three more CD's called Neck Tar, Mortgaging the Farm, and Fractal Distillation.

The newer albums also promised good luck if I made seven copies in seven days and shared them with others. (I did.) Like the Chain Tape, these newer releases contained tons of strange, uneasy listening music. But I'd say my luck has improved as a result of listening to the GoaTease and continuing the chain.

The note inside the package (written in purple crayon) also said I would receive copies of their new projects when they were completed. Though I have never met the GoaTease and don't even know their names, they have still kept in contact with me throughout the years via USPS and email.

I have since received their fifth album He Inhaled Ambrosia in 2012. It's actually very listenable by GoaTease standards. It contains "dance" remixes of tunes found on their earlier releases. The rhythms are solid and discernible. What's more, only two of the songs are painful to listen to. (Keep in mind I have pretty forgiving ears.)

In February 2015 I received yet another package containing the latest GoaTease release called D'TOCEAM: Death Threats On Chad Everett's Answering Machine. It's a collection musical death threats that succeeds at being dark, depressing, scary, and funny all at the same time. It has become my favorite GoaTease album.

A new cassette version of the Chain Tape arrived by mail in 2018. Learn more here.

I will admit that I stole a few of the GoaTease riffs and incorporated them into my own songs. I even included GoaTease songs in some of my theatrical productions. But how can I rip something off if they are giving it away for free? I figure stealing their material will only increase my good luck.

Some might question my enthusiasm for what is probably the world's least accessible band. I can only explain it this way. If the GoaTease continue to make music that is even less accessible than my own, it only makes me look better! Besides, they are avant garde hillbillies from rural Idaho who have been around since the 80s and have produced almost seven hours of really weird music. What's not to like? They get my full support.

The GoaTease granted me permission to showcase their work on this site. All of the albums are free for the taking on the GoaTease download page. Just make sure you share seven copies within seven days.

Note: I am not responsible for any bad luck that might result from not continuing the chain.

PS: I believe this is the only official web presence available for the GoaTease:
http://groups.yahoo.com/group/goatease