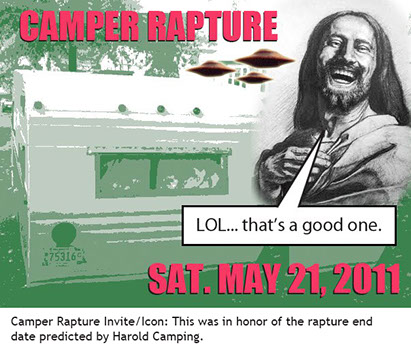 In 2008 I purchased a 1968 Forester canned ham travel trailer and restored it. It then became my party room as well as a camper for family outings. It was sort of my poor man’s up north cabin. Since it was too small to invite large groups of friends up north for a party weekend, I began throwing Saturday night parties at the fire pits in Como Park, Saint Paul. I figured if I can’t have an up north bonfire party, why not bring the up north back into town?

I would soon establish that the “proper” kind of music for camper parties was a variation of dirt ball, white trash, trailer park music… ie: classic rock. The camper became a fun environment for dance parties since half a dozen guests in that small space seemed like a crowded room and people dancing would make the springs bounce up and down, making for an interesting, intimate party experience.

Soon I would add disco lights to the camper and then the classic rock/disco remix/mashup concept was incorporated into the parties. The “Camper Rave” was born. Since I would never wish to go to and actual EDM event, the Camper Rave was a way for me to hang out with a smaller group of people whom I actually LIKE, rather than a bunch of vapid dumbasses on ecstasy in a warehouse. Plus, I get to pick better music.

I began creating remixes and mashups of classic rock tunes and started to showcase them at these camper parties. Part of the challenge was to make competent remixes using only stereo classic rock tracks with no isolated instrument stems or acapella tracks.

Since I didn’t have enough of my own mixes to fill the night at the camper parties, I would scatter my productions in with remixes and mashups I found on the internet. I soon would become a connoisseur of classic rock remixes and mashups. Some of my favorite artists in this genre are Mighty Mike, DJ Morgoth, Lobsterdust and 2 Many DJs.

Most fans of classic rock don’t like those old tunes being messed with. They want to hear the same 500 songs played the same way a million times in a row. They especially don’t want to hear those songs made into disco. I however like to think I am offering classic rock fans a great service. I feel my tracks can bust them out of their mind control.

Despite the fact that rock is marketed as “rebellious”, it is actually all about conformity. Classic rock is the modern day equivalent of the negro spiritual. It is there to ease the suffering of the slaves as they toil. Why else would construction workers listen to it while working in the 90 degree heat? Do you actually think those corporations really WANT people rioting in the streets after hearing “Street Fighting Man”? Please. In short, my tracks will help the common man break the shackles of their mind tyranny so they can free themselves from within.

In addition, EDM fans don’t really like classic rock. Thus, my mixes are virtually assured to be despised by all audiences. Why do I do it? Who knows. I just can’t help myself. But DJ Squid Viscus tracks always worked well in the camper. People would line up 15 feet deep, all the way to the fire pit for a chance to get in on the fun!

The camper has since been sold and the parties will continue in a restored school bus RV… affectionately named the “Gay Deer Hunter Sex Wagon” by Newt Skink (of course). Whether I create new mixes for the bus parties will depend upon my level of inspiration. The following tracks represent the best I can offer from the Camper Rave era. You can also hear DJ Squid Viscus material on Bootleg Remixes, Mashups, & Sound Collages at Soundcloud.